It seems so long since I last wrote anything. Each time I intended to, there seemed to be nothing to say and the longer I left it, the harder it became to make a start.

May was a strange month, starting with the death of a friend’s little girl – expected but not so soon – and a friend in hospital away from home. It’s been a creative time but with no clear patterns or plans.

In late April, I discovered ‘Me-Made May‘ and committed to wearing one or more handmade – by me – items each day. I’d just  been looking through my selection of sewing patterns and thinking about my summer wardrobe so the timing was perfect.

Within a week or two, I’d made three tunics for the spring and summer (though it’s been rather chilly here in Yorkshire so they have only been wearable with lots of layers and leggings or jeans so far!). 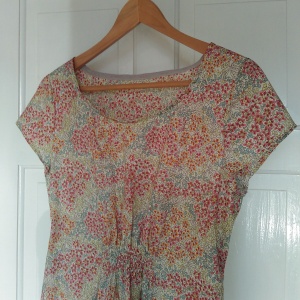 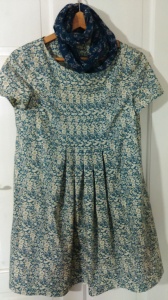 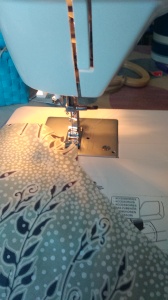 Initially I shared images daily and kept up with others on Instagram with #mmmay15 but by the end of the month, though I kept with wearing my me-made clothes, the photos fizzled out.

For the first time in a while, a couple of custom orders came in. One was a Christmas wreath (similar to one I made last year) – chosen by the winner a raffle prize for an event supporting the mental health charity Mind –  and the other, a mermaid’s tail cocoon for a ten-year-old. 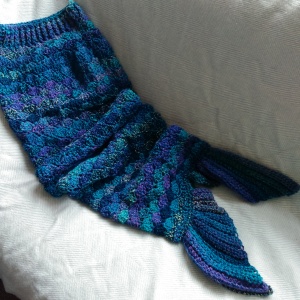 It’s based on a pattern by Kat Goldin, but sized up for a taller child. I used front and back post stitches to create the ribbed waistband – which I prefer to the alternative method that works short rows of dc/sc in back loops only and then working into the side of a strip – and then joined the front and back at the foot end, and worked the tail fin directly into the seam. This took a few attempts but eventually I settled on half trebles (hdc) in rows of decreasing  length, working into the centre from each side and then joining the two parts with a short seam at the centre.

Throughout the month, Sarah from Crafts from the Cwtch organised a makealong of shawls through a Ravelry group. There has been a huge variety, many of which can be seen on Instagram with the tag #cftcmakealong. I decided to use a French pattern, Alphabet, and some hand dyed lace weight yarn that I’d bought a couple of years ago from Truly Hooked. It took almost the whole month to complete but I have definitely caught the shawl-making bug and have two more on my hooks at the moment, both from The Shawl Project: Book One by Joanne Scrace. 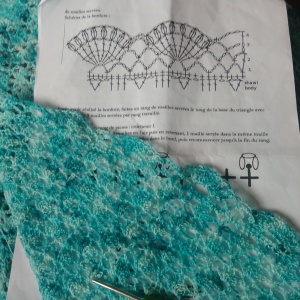 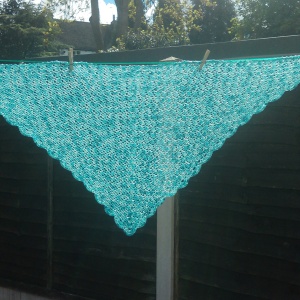 Having made blankets for the girls, I decided that Mr T. and I really ought to have one of our own, too. I had bought the yarn for Jane Crowfoot’s Lily Pond but decided that it wasn’t something I was likely to make soon and so have started on a different pattern –Bercé par les vagues – by Laurence Mériat. It’s a lovely wavy pattern and is written in French but has a chart in the instructions. I have translated it into English and will revise and share it soon (with permission from the author). 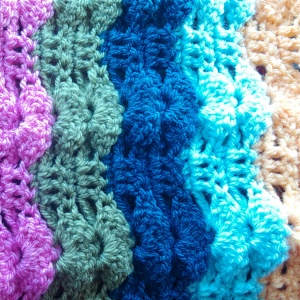 What have you been making this month, and what would you like to work on over the summer?

This site uses Akismet to reduce spam. Learn how your comment data is processed. 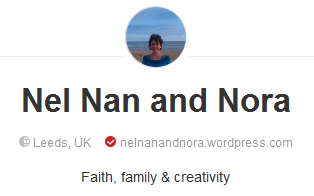 Health and Fitness in a Busy World

The Republic of Heaven

still looking for it ...

After cancer, get your oomph back

A guide to getting fitter

Ramblings and rants about something and nothing

Sew organised style - listen to people just like you

Snippets of life in the studio with Laura, avid dressmaker, fabric hoarder

Home of the Leeds Labour Group on Leeds City Council

Life and Parenting After Loss

Madalynne Intimates - Lingerie to buy and lingerie to sew

Building hope in our community

All things sewing with Naomi